I want to share with you a major health secret. Greens are the most important, nutrient dense food you can eat. Green smoothies were developed by raw food pioneer, chef, author and educator Victoria Boutenko. It was her solution to the problem of not getting enough greens into her diet. Green smoothies are very simple to make and the healthiest thing you can eat. I am including an excerpt from her latest newsletter below about a man who has lost 220 lbs. in one year on green smoothies. He had been given 2 to 4 years to live because he was 400 lbs. and diabetic with high blood pressure. He no longer takes medications and has no symptoms of diabetes anymore. Here is his amazing story.

"Clent has lost 220 pounds to date, became free of diabetes symptoms, returned to normal blood pressure, naturally shrunk the hanging skin without surgery, and climbed to the top of Mount Whitney – the tallest mountain in the U.S. at 14,497 feet - all in only 51 weeks!

Clent’s success is largely due to the consumption of Green Smoothies on a daily basis. Green Smoothies are prepared in minutes by blending 60% fruit (such as apples, bananas and mangoes), 40% green leafy vegetables (such as spinach, romaine lettuce, etc…) and water. Clent’s magical transformation naturally attracted attention from his fellow employees and customers alike. (Read Clent's six month update) After being interviewed, Clent now receives hundreds of emails and phone calls a day asking him how he did it." Read Clent's 51 week update http://www.greensmoothierevolution.com/update.htm

Read some of the most Frequetly Asked Questions Clent has Received
http://www.greensmoothierevolution.com/clent_faq.htm

Here is a link to Sergei Boutenko, Victoria's son, demonstrating how to make a green smoothie. Scroll down the page a little and you will see the u-tube video window. Just click on the arrow on the screen.
http://www.rawfamily.com/products.htm

You can also Google "green smoothies" for recipe ideas. Read Victoria's book Green For Life if you really want the full benefits of green smoothies.

My husband is going on a green smoothie diet after the Super Bowl. Comment below if you would like to join him. We do not have a blender yet, so as soon as we get that worked out, we are going start. More to come on that! 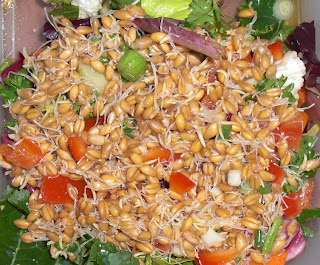 Mix all ingredients together and let stand for 1 hour before serving. Serve as a side dish with dinner or on top of a green salad for a nutrition packed lunch. For instructions on growing your own sprouts, visit my article "How To Grow Sprouts and Why You Should Eat Them" at

Eating a Healthy Diet on a Tight Budget

There is one question I am asked very often. "Isn't it expensive to eat healthy?" Well, for many reasons, I believe it is expensive to eat unhealthy. Think of how much it costs to go to the doctor, to buy medications, to have no energy. My energy is abounding these days! I can go on so much less sleep than I used to. My family never has to go to a doctor or take any medications. I have also learned a few tricks for healthy eating on a tight budget. I will share all of these tips with you in my new article "Feeding Your Family Organic Food on a Budget."